Transit observations through the ages

On the day of the transit the Royal Astronomical Society Library will be displaying historical accounts of transits of Mercury, such as the first observation made by Pierre Gassendi in 1631, and William Herschel's observations of the transit in 1786 and 1802. Also on display will be the earliest detailed drawings of the planet's surface made by Johann Schröter. 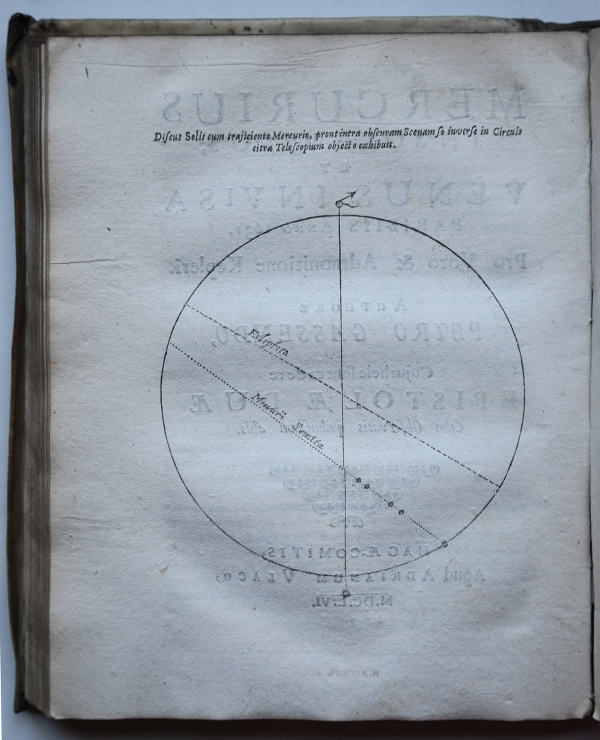 Pierre Gassendi was a French philosopher, priest, scientist, astronomer and mathematician, whose work was influential in its advocacy of the pursuit of an entirely empirical view of the world, within the constraints of our sensory perception and tradition. In 1631 he was the first to observe the transit of a planet across the Sun when he viewed a transit of Mercury that had been predicted by Johannes Kepler, as shown by his depiction here of the path of Mercury across the face of the Sun.

Johann Schröter had an extra-curricular interest in astronomy when he was a Law student in Germany. Due to his interest in music, later in life he became acquainted with William Herschel and the rest of the Herschel family, which rekindled his interest in astronomy. Schröter published a number of findings of the surface features of Mercury, some diagrams of which are shown in this book in which he reports observations of both Mercury and Venus. 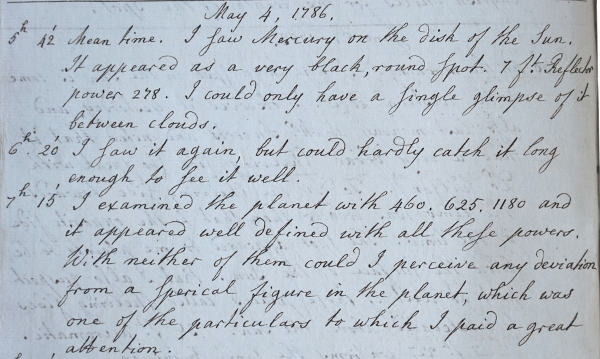 William Herschel, a German musician and astronomer, is best known for his proficiency in telescope building, observation and astronomical theory, and for being the first person in history to discover a planet in the Solar System due to his discovery of Uranus. Shown here are his notes from an observation of a transit of Mercury across the Sun from 1786. Herschel writes that he was looking at the shape of Mercury and attempting to measure it, but due to the weather conditions was not able to obtain a measurement he was satisfied with. 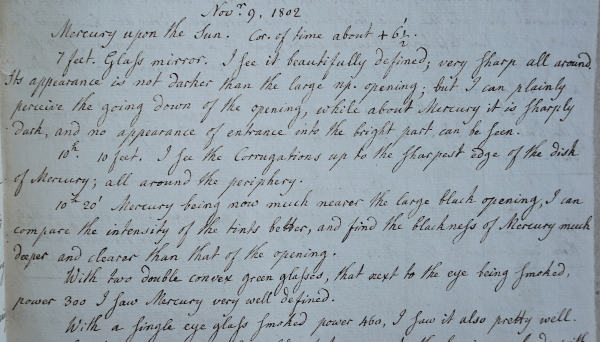 This is an extract of William Herschel's account of his successful observation of the Transit of Mercury on November 9th, 1802 (the weather conditions were more favourable than during the previous transit in 1786).

The Royal Astronomical Society (RAS, www.ras.org.uk), founded in 1820, encourages and promotes the study of astronomy, solar-system science, geophysics and closely related branches of science. The RAS organizes scientific meetings, publishes international research and review journals, recognizes outstanding achievements by the award of medals and prizes, maintains an extensive library, supports education through grants and outreach activities and represents UK astronomy nationally and internationally. Its more than 3900 members (Fellows), a third based overseas, include scientific researchers in universities, observatories and laboratories as well as historians of astronomy and others. Follow the RAS on Twitter via @royalastrosoc