Mercury as a planet

Mercury is the closest planet to the Sun. It completes each orbit around our nearest star in just 88 days, and its distance from the Sun varies from 46 to almost 70 million km. (For comparison, the Earth is at a distance of 150 million km.) 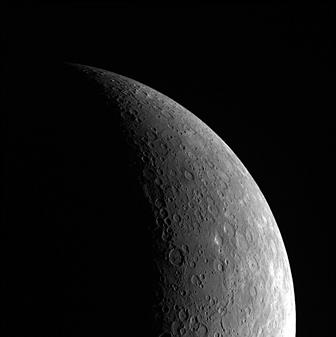 A 2011 image of Mercury, seen as a crescent by the MESSENGER spacecraft. Credit: NASA/Johns Hopkins University Applied Physics Laboratory/Carnegie Institution of Washington. Click for a full size image

The smallest planet in the Solar System, Mercury is just 4900 km across, or about 40% the size of the Earth. As a result, its gravitational field is too weak to hold on to a significant atmosphere, so its surface has little protection from incoming meteorites. The result is a pockmarked, cratered landscape that looks rather like our Moon. Mercury also has a global magnetic field, the result of a large iron core, and is as dense as the Earth.

Mercury also rotates very slowly, taking about 59 days to turn once with respect to the stars (the so-called sidereal day). Its fast motion around the Sun means that a solar day (the time from one ‘noon’ to the next) is 176 Earth days, or 2 mercurian years. With no atmosphere and weather, Mercury also experiences extremes of temperature, with a typical point on the equator at a torrid 430 degrees Celsius during the day, falling to a decidedly frigid -160 degrees Celsius at night.

Intriguingly the smallest planet has deep craters near its poles that never receive sunlight, so are amongst the coldest places in the Solar System. Radar measurements suggest they contain large amounts of water ice, probably delivered by comets and meteorites that collided with the planet over millions of years.

From Earth, Mercury looks small, and telescopes struggle to show much detail, though astronomers have tried to make simple maps. The planet is always fairly close to the Sun in the sky, and particularly in the northern hemisphere we only ever get to see it in morning or evening twilight. Along with Venus, it shows phases like those of the Moon that change as it moves around the Sun. 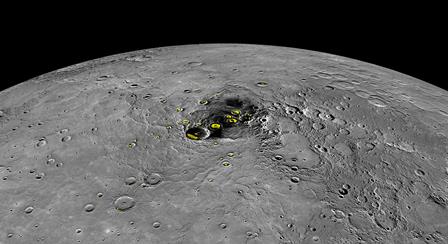 A MESSENGER image of Mercury's north polar region. The yellow regions in many of the craters mark locations that show evidence for water ice. Credit: NASA/Johns Hopkins University Applied Physics Laboratory/Carnegie Institution of Washington. Click for a full size imageBecause it is so hard to study from the Earth, most of what we know about Mercury comes from space probes. The NASA Mariner 10 spacecraft was the first to visit the planet, making three separate flybys in 1974 and 1975. More than 30 years passed until the next mission, the NASA MESSENGER probe, which mapped the whole world for the first time and confirmed the presence of water ice.

2017 will see the launch of the joint European Space Agency / Japanese mission, BepiColombo, set to arrive at Mercury after a 7-year journey. On arrival, it will separate into two orbiters, one making images and taking spectra of the planet to study its composition, and the other concentrating on Mercury’s magnetic field and its surroundings. Working closely with European partners, UK research groups at the Open University and the University of Leicester are building three of the instruments for the mission.

Want to know more about the planet Mercury?

Check out this amazing video by astronomer Phil Plait (part of the Astronomy 101 series) to find out everything you need to know!